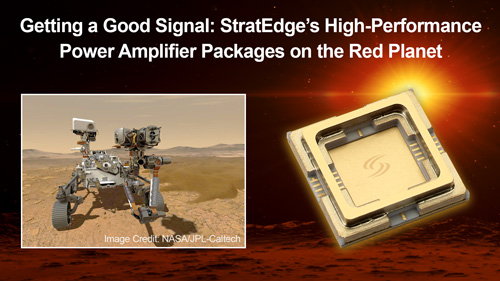 Santee, Calif. – 4 February 2021 – StratEdge Corporation, leader in the design and production of high-performance semiconductor packages for microwave, millimeter-wave, and high-speed digital devices, announces that its SE20 power amplifier packages are playing a key role in transmitting signals with information gathered from NASA's Mars rover missions back to earth. With the Mars 2020 Perseverance rover arrival next month, StratEdge packages are yet again traveling to Mars. The key to success is the same as before, high-quality and high-reliability packages that can survive the extreme conditions on the journey and finally working on Mars.

StratEdge's participation in the Mars rover missions began in 2003 with twin rovers Spirit and Opportunity and then again in 2011 with the Curiosity rover. To transmit signals and information back to Earth, the rovers were all equipped with power amplifier packages from StratEdge. The power amplifier system was designed to protect the gallium arsenide monolithic microwave integrated circuits (MMICs) to ensure true signal integrity. All signals that are transmitted go into the StratEdge package through the chip, and back out the package. It's critical that the package doesn't interfere with the signals produced by the MMIC, and StratEdge's proprietary package design minimizes signal loss so the MMIC performs optimally.

"The StratEdge team is honored to be selected again to be part of the great engineering successes on Mars making historic achievements," says Casey Krawiec, VP of global sales for StratEdge.

To learn more about the Perseverance mission, visit:  mars.nasa.gov/mars2020.